Charging bier and importing the coffin towards manually and automatic into the cremation furnace. To enter a coffin in a safe manner in a cremator, DFW Europe has developed both a manual and an automatic charger.

DFW Europe also produces the catafalque. This is being used for the internal transport of the coffin inside the crematorium. From this catafalque, which has rolls, the coffin can be imported, placed into a funeral car quite easily.

Automatic charging bier, safe charging of a coffin.
A full-automatic, integrated charger is the right choice for the safe transfer of a coffin at an oven temperature above 500°C. DFW Europe developed this coffin insert machine and marketed it in 2008.

One simple action involving a minimum of effort transfers the coffin, as it travels along the transport trolley, onto the automatic charger. The AIM is activated via the touch-screen, after which the coffin is transferred to the oven fully automatically. The loading door is opened fully automatically and closed again once the coffin has entered the cremator.

Once the coffin has entered the cremator, the charger automatically collapses, rolls under the oven, and is entirely hidden from view. The fact that the machine is automatically stored away after use means that the location is left clean and uncluttered so that family and friends can be received respectfully. 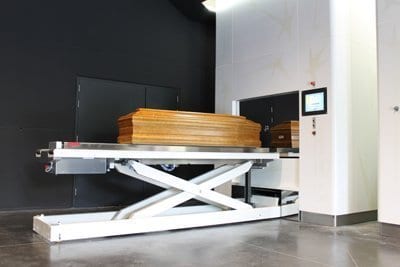