Cranwell Family Steps Into The World Of Cremation

Home / News / Cranwell Family Steps Into The World Of Cremation

Interest in cremation has clearly started to rise in Ireland. There are several reasons for this according to Dara O’Callaghan and Fiona Cranwell. It is easier, cheaper and ground is scarce, even in Ireland. “We officially started our Shannon crematorium, which borders on Shannon’s cemetery, in June of this year. Prior to this we organised an open day for which more than 2000 people registered. People are inquisitive and they have a multitude of questions. We gave them plenty of time”, according to Fiona.

The Cranwell family, particularly Jim jr., has done a lot of research and took part in a lot of conversations. He got in touch with DFW Europe’s contact. He also got to know Declan Finnegan of Crematorium Cavan, where a DFW cremator has also been installed. This proved to be the start of a fruitful collaboration with DFW Europe.

Shannon happy with its new crematorium

Openness and transparency were the key words during information sessions. The same openness was in evidence during the well-attended open day. Dara: “We showed them everything, the oven, the charging bier, the filter installation, the cremulator, our control system that ensures that the right ash is always given to the right family, etc. It resulted in an enormous amount of goodwill, as we are still reminded each and every day. People have lots of deeply-rooted ideas, we were able to show them that it really isn’t frightening, that there is no enormous chimney emitting thick smoke.”

The Cranwell family is very satisfied with having chosen DFW Europe’s DFW 6000 cremator. Fiona: “Up till now we have carried out more than 60 cremations and we expect this number to grow steadily. The cremator system is very complete and user-friendly. Furthermore, the DFW Europe team can always be reached and questions are answered immediately. If necessary, they can look at the system over distance. That gives masses of confidence and a sense of security.” 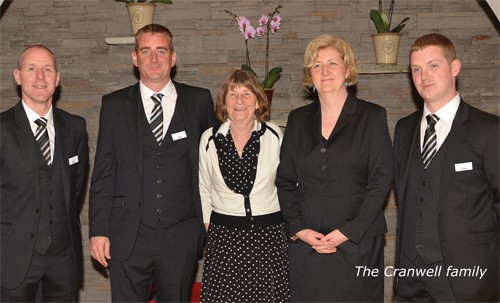