Respectrum Crematories: At the top of Drenthe, in the middle of the Ommeland, Respectrum has realised its new asset, Ommeland en Stad Crematorium. Respectrum is a private organisation aimed at the development of small-scale crematoriums in the Netherlands and Germany. The founders Bert van der Weide, Eric Krohne and Hans van den Berg have gained great experience in the funeral industry and put their knowledge and understanding together in Respectrum Crematoria. Respectrum currently has three crematoria in the Netherlands: Hardensberg, Eerlderwolde and Dokkum. Shortly, a start will be made with the development and construction of Lingen Crematorium, the first crematorium of Respectrum crematories in Germany.

In Ommeland en Stad Crematorium (officially opened in February of this year), around 800 cremations will be performed with a DFW 6000 cremator in the long-term. Eric Krohne emphasises the unique way of working: We work locally and preferably with local suppliers. We especially want to give each family the time to say farewell in their own way. This means for us that you always pay the same rate, even if you use the accommodation for longer. We do not push but give room instead. We are open seven days a week, so also during weekends and in the evenings, facilitating dinners if requested.

An estate-like environment in a park-like setting was aimed at in the pre-phase. And we found that location. Respectrum crematories operational director Krohne will supervise the entire project until taken into use. Eric: “I will then give them an induction and supervise them until I think that they are ready to work alone, following which I will then direct them from a distance. Meanwhile, a start can be made with the next project. I leave the daily work to our carefully selected specialists”.

The right place for the building and the architectural style, BREEAM certified, were found and adjusted to the environment. Spacious, many natural, sustainable materials and a pure appearance. Eric: “We can arrange cremations in four places in this accommodation and receive groups of people from 300 up to 400 people. The choices for people are just as diverse as the people are, everything is possible really.”

The cremator in Ringsted (Denmark) served as an example for the DFW 6000 cremator. Eric: “Many next of kin now want to be there when the coffin with the deceased is inserted into the cremator. This requires a cremator which does not appear frightening, but that gives people some kind of trust and a good feeling. People can come close to the cremator, sit around it, which is experienced as very special.”

DFW Europe and Respectrum have been doing business together for some time to both their satisfaction. Eric: “We are very enthusiastic about the equipment and consider DFW Europe a very reliable partner, which always meets the commitments made. We easily communicate with each other and act quickly as a result. Mutual expectations are clearly communicated and that works well. As a result, we are working together on the development of the first hybrid cremator. 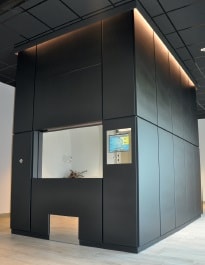